That was when I realized what a great liar my mother was. 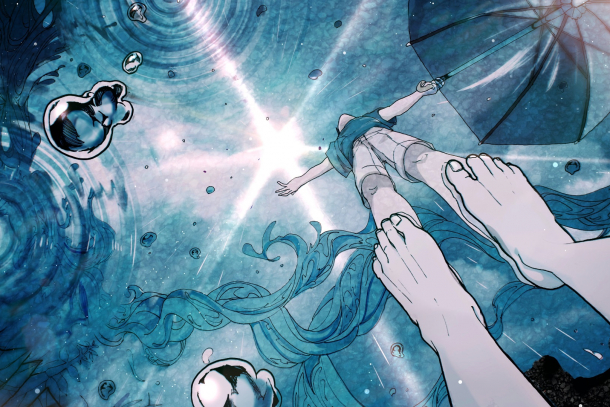 My mother told me that when I wanted to forget something, I should go out and bathe in the rain.

That’s what she did when she ran after my father when he left home when I was fourteen.

And on the nights after that where she would wait outside our house, eyes frantically searching for a pair of headlights, arms filling the warmth that once was provided by another pair of arms.

She let the rain soak her hair, her clothes, her skin. She let the chill take shelter in her hollow, beat-up bones.

After two weeks of the same regimen, she was okay.

She began to cook breakfast again, humming that familiar motown tune by the kitchen window.

She continued her usual morning runs.

She read the same self-help book for wives religiously and slept at exactly 11 in the evening, regardless of a good TV show or a friend of hers wanting to come over.

And it was as if nothing ever happened, and my father was still there.

So I shared the same belief.

I believed that the rain could dilute the pain, that the rain could cleanse the spots where her fingers once touched you, that it could wash away the sacred corners where her lips once hovered to plant the most illicit of kisses, that its melodic pitter-pat could make you forget the tone of her laughter or the sound of her voice.

So when we fought, and I decided that I was too tired of us, I stood under the rain, hoping it would cleanse me.

I let it soak my hair, my clothes, my skin. I let it in my dry, beat-up bones.

But instead of making me forget, the raindrops cleared my eyes to remember—remember that our love was born of storm clouds and lightning flashes.

That was when I knew my mother was wrong.

That was when I realized my mother’s eyes were swollen despite her going to bed early.

That was when I realized that she measured her worth by reading the same self-help book over and over again, memorizing it page by page, word per word.

That was when I realized that her morning runs were to stop her arms from sagging, to keep her stomach from reaching its rotund figure, to keep her legs conditioned so her strides could keep up with the twenty-something ladies my father probably has developed a liking for.

That was when I realized her cooking wasn’t perfect and that one side of the bacon would always be charred because she stared too long outside the kitchen window longingly, probably still wanting him to come back.

That was when I realized what a great liar my mother was.

In the end, my father left, and she was not okay, and nothing was ever the same.

In the end, pain numbs you like cold, pelting raindrops and transforms you into a devastated wreck after the storm has passed and you know, despite saying otherwise, that nothing is the same and nothing will ever be the same.

Contrary to what most people believe, pain doesn’t leave.

It just stays there.

And like it or not, you just get used to living with it.

DevOps (Development and Operations) with a focus on PHP web applications and cloud-based Ubuntu servers.

I have worked in many kind of projects and experienced in building large custom MVC web applications in PHP, using frameworks like Zend Framework, Zend Expressive, Apigility, JiNexus Framework, Doctrine ORM, Code Igniter, Phalcon and WordPress. Currently I'm focusing on back-end web applications in PHP and MySQL, I also like to venture out into the Bootstrap based front-end world using HTML, CSS and JavaScript. And sometimes one needs to experiment with other technologies and I've done this with Python, PostgreSQL and SQLite.

"The fact that I don’t believe that I’m better than anyone else gives me an inevitable sense of superiority."

How I Am Able To Envy You

Freedom Is A Poem